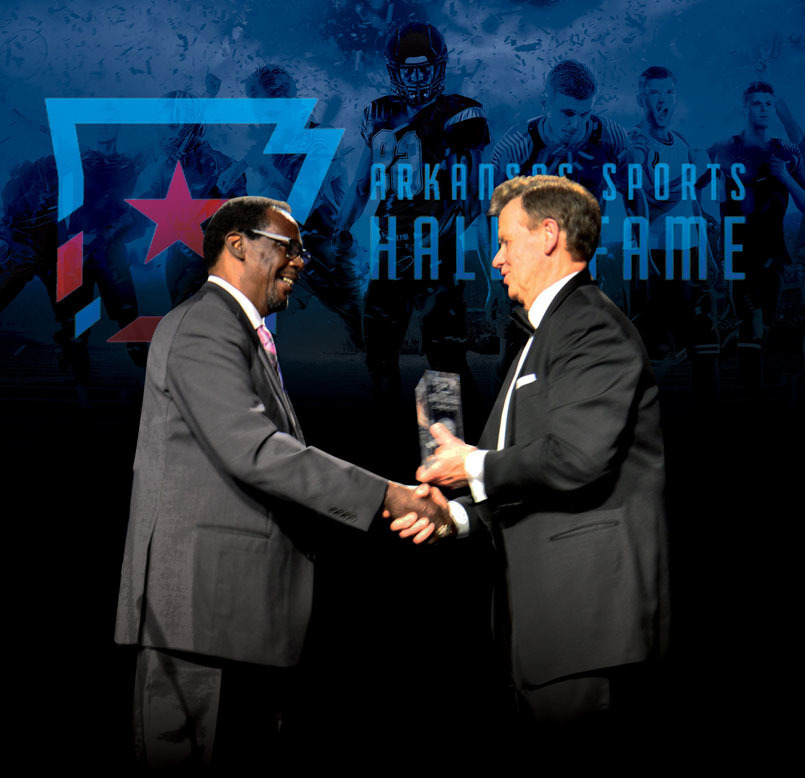 Few Arkansans with a claim on athletic success enjoy the respect that Greg Flesher has earned. Intelligence, integrity, and empathy have combined to provide the 66-year-old with a winning personality  and a presence communicating sincerity and guaranteeing trust. The lanky 6-footer shies from the praise that trails him, but his best efforts seldom prevail. Clearly, he is one of the 501’s most accomplished and admired citizens.

Many in the Natural State are surprised to learn that Greg is not a native Arkansan, and that he was born Gregory Ward Hatcher on Jan. 15, 1956, in a Des Moines, Iowa, hospital. The parents he once identified as “lower-middle class” resided 25 miles away: Donald and Peggy Hatcher of New Virginia, population 400.

Tragedy visited early, when Greg was only 3. The death of his father in a 1959 car wreck forced a 14-mile move to Indianola, where he and his mother shared a modest home with his maternal grandmother and two uncles.

Just before he entered kindergarten, his mother remarried, and his stepfather, Fred Flesher, adopted him, and the only child soon found himself with three siblings. Greg’s stable small-city home life aided him academically and socially, his little red wagon and the sweet corn that it maneuvered door-to-door introduced him to entrepreneurial success, and playground and gymnasium activities quickly revealed his penchant for basketball.

But another life-changing intrusion surfaced on the eve of his sophomore year in high school. He moved again, this time to distant Morrilton, Arkansas, where his father was to teach far into the 1980s. School integration had been slow to come to the Natural State, and shortly after his enrollment, Greg learned that the city’s finest young basketballers honed their skill on community courts where word was circulating that ”there’s a new tall, skinny white kid in town who thinks he’s got game.”

North traveled South, and lifelong respect was born. Indeed, Greg “had game,” and his friendly foes nothing less. Basketball, skillfully played, proceeded to blend the two into a harmonious, victory-devouring unit, always to be remembered, in Shakespeare’s words, “… we few, we happy few, we band of brothers.”

“Remembered” they were. After a year as a valuable substitute, Greg was crucial in Morrilton’s most celebrated season ever. The legendary John Widner was head coach and Greg a starter and a star on the team claiming a 32-3 record and the 1973-74 State AA Tournament Championship (with senior teammate Billy Joe Murray gaining MVP honors).

The Championship season was a noteworthy first, central in a revered “remembered” past. Never before had the Devil Dogs taken the state’s top basketball prize, and joy and pride saturated the city and the county. It also proved to be the lone state title that Coach Widner would win in his illustrious 831-victory high school coaching career.

In the following season, the gifted coach came within an overtime loss of shepherding the Devil Dogs to a second consecutive state championship. Greg was at his basketball best, gaining a host of honors, including All-Region, All-State, MVP, AA Player of the Year, and membership on the state’s Super Team, selected by the Gazette.

No one followed Greg’s Devil Dog career more closely or admired him more than Cliff Garrison, Hendrix University’s head basketball coach and another member of the Arkansas Sports Hall of Fame. To Cliff, Greg was “all-around  phenomenal” in 1974, a speedy basketball scorer and rebounder, as well as Morrilton’s first National Merit Finalist and both the senior class president and its valedictorian.

Rejecting numerous offers, Greg accepted a sizable award at Hendrix while committing to play his intercollegiate basketball for a thankful coach. After a season of sporadic appearances, Greg moved into a starting slot that saw him on the floor at tip-off in 51 consecutive contests in back-to-back campaigns.

He was poised, Coach Garrison was later to say, to earn All-Conference honors as a senior; he was on the brink of stardom.

But misfortune intruded.  A torn ACL in the last minute of the last game of his third season launched a series of surgeries that limited him to 10 games as a senior and carried into the new millennium. Flesher would eventually undergo two knee replacements (one on each knee) in 2004 and 2006. Undaunted by the injury, Flesher completed his baccalaureate on June 1, 1978, and four days later began employment at Frost PLLC, a public accounting firm. He proudly admits that during his 45 years with the company, he held “every position from entry-level staff accountant to managing partner.”

His love of work did not prohibit a three-year courtship of Dora Jane Oudin, whom he married in 1981. Nor did it keep him from devoting hundreds of hours to community service. Empathy has been his motivation, kindness — a word he quietly admires — its embodiment, and gratitude its consequence. Recipients, some surprising, some not, border on the countless and span a range of fields, from the arts to athletics.

They include Little Rock’s Repertory Theatre. Flesher also aided with “a generous private donation of $725,000 from the Donaghey Foundation” to update the UALR Donaghey Athletic Center. He assisted the Rotary Club of Little Rock in acquiring $2 million for the Rotary Club 99 Foundation as the club’s Centennial project. Greg has poured his expertise and energies into community improvement on more occasions than he could ever remember. Morrilton, Conway County, the 501 — and oh, so many more — have been the fortunate beneficiaries.

Through it all, Greg’s affection and respect for his “band of brothers,” and for the coach who made the championship possible, has never faded.